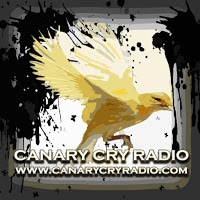 Today I did an interview with Gonzo Shimura and Basil Rosewater the hosts of Canary Cry Radio. If you are unfamiliar with their website you will have to look it over and see their ministry.  For those of you who follow end times Gonzo Shimura  has produced some great videos and music on the end times and Bible Prophecy. While we differ in areas he is very talented and gifted, which comes through in his work.

The interview itself was the most unusual I ever encountered.  It was also my first station in California.  It started late because Basil Rosewater the co-host was asleep.   Gonzo Shimura had to wake him up. About a half an hour later when Gonz decided to go it alone Basil awoke.  Meanwhile Gonzo Shimura sent me a hilarious video of our President working out that would also have Putin splitting a rib from laughing so hard. Finally Basil awoke and he comes on the radio sounding groggy.

It was an experience that only someone with the heart of a poet could understand. Despite the unconventional start it is an interview with a lot of information you will not want to miss so keep and eye out for it.  Meanwhile check out Gonzo Shimura’s website, videos and music.

Meanwhile the interview can be found here: