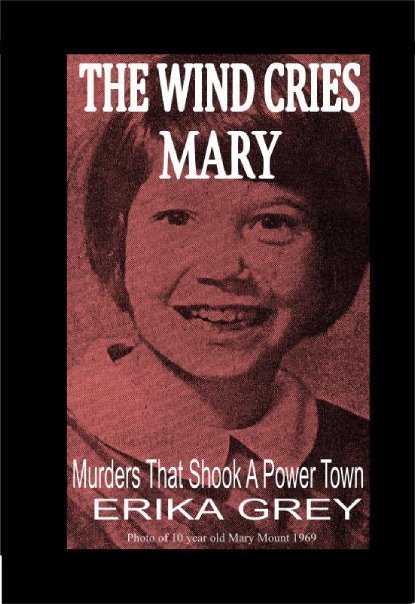 My book The Wind Cries Mary: Murders That Shook A Power Town is for sale. While my website deals with Bible Prophecy and that is the bulk of what I write, I could not resist to write this true crime story that happened down the road from where I grew up as a child.

For those who have come to this page for the Mary Mount, John Rice story dont be taken aback that this is a Bible Prophecy news site and while you are here take a look around.

I want to talk a little about the cover design and the title, which is actually inspired from an account in the Bible.

The Cover to the Wind Cries Mary

I am very excited about this. I am also pleased with the cover design which shows Mary Mount’s photo which was distributed to newspapers at the time of her abduction. The cover has the feel of a milk carton photo but the faint reddish tint over the photo eerily reminds the reader of her being deceased.

The Title of the Wind Cries Mary: Murders That Shook A Power Town

I chose the title The Wind Cries Mary, which is the title of a Jimi Hendrix song, after reading the passage in Genesis of Cain killing his brother Abel which is the Bible’s first recorded case of murder. Death is a part of life but murder which eliminates a life before its time unsettles us. Eerily the Bible records in Genesis 4: 10…the voice of your brother’s blood cries out to me from the ground,” it cried from the ground because of his life that was cut short before his time, he should have lived until accident or illness took him not at the hands of another. So The Wind Cries Mary for 10 year old Mary Mount, in the same way that Abel’s blood cried for his life which was terminated unjustly by the hands of another human being.

I would like to add that although The Wind Cries Mary is classified as a true crime story I did not want it to establish me as a true crime author, but rather as a non- fiction work.

On Bible Prophecy, prior to writing the Wind Cries Mary I wrote,  The Seat of the Antichrist: Bible Prophecy and the European Union which I updated before publication.  When I began this work I knew that it would be my life work meaning that in addition to being my primary work, when the book would be completed the research would continue and be ongoing.

If you have come here because of the Mary Mount story please purchase the book for the detailed, minute by minute account of the crimes that shook New Canaan CT in 1969 and 1970 and look over my other books while you are at it.   In the mean time I hope that you will look over my website and I hope you enjoy it.