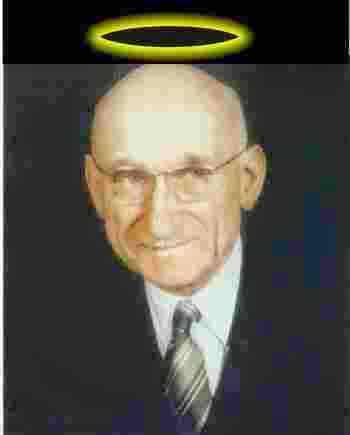 Robert Schuman one of the EU’s founding fathers is on his way to Sainthood. Pope John Paul II considers Schuman an authentic Roman Catholic and an example to all those responsible for the construction of Europe.

In my book The Seat of the Antichrist: Bible Prophecy and The European Union I devote an entire chapter to the Whore of Babylon, which sits on top of the Beast of Revelation, which is the final world empire, who later during the Antichrist’s reign is carried off and destroyed.

Schuman, a two time Prime Minster of France, who also held the positions of finance minister and foreign minister, helped found the European Union, the Council of Europe and NATO. Shuman. a Christian democrat was an intensely religious man. He attended mass daily, and along with being a political activist he was a Bible scholar. He commended the writings of Pope Pius XI who condemned both Fascism and Communism.  He was expert in medieval philosophy including St. Thomas Aquinas and Jacques Maritain, a French catholic philosopher who converted to Catholicism from Protestantism.  As Foreign Minister, he announced in September 1948 and the following year before the United Nations General Assembly, France’s aim to create a democratic organization for Europe which a post-Nazi and democratic Germany could join. In 1949–50, he made a series of speeches in Europe and North America about creating a supranational European Community. This supranational structure, he said, would create lasting peace between Member States.

The protocol for the Catholic Church canonizing a person to Sainthood is as follows:

While the Church cannot call Shuman a martyr they investigated to see if he practiced his faith in a heroic manner.  To date there are no Robert Shuman miracles, but these can yet happen. By uniting Europe via the EU, Schuman brought to fruition Catholic ideology of unity, peace for all and the brotherhood of man which again is discussed in detail in my book.   For this reason alone, if no miracle occurs the Church might find Schuman a hero and beautify him as Saint Robert for modern day politicians.  The beatification of Robert Schuman marks the Church’s hold on the EU, which Revelation 17 depicts as the Whore of Babylon sitting on the Beast.   By making one of the EU’s founder’s a saint the Catholic Church affirms the EU’s importance to the church and that the EU is viewed as the Church’s political extension.

It should be noted that while the Church will have a role in the Beast of Revelation’s formation, once the Antichrist steps into power-through his deceit and cunning- and reveals his true colors, he destroys the Church and all religion. this will occur mid way through the Tribulation. According to prophecy in the Bible,  he will accomplish his aims. Religion in any form will not be tolerated in his police state where he establishes himself as a god. This is all detailed in Bible Prophecy.