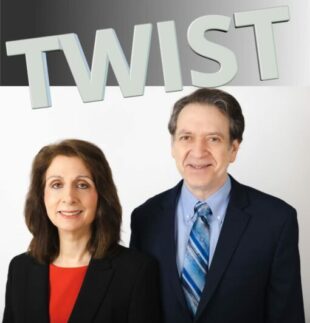 World News analysis and interviews with a dose of reality and on the edge.

What happens when you bring together two unlikely commentators? One hails as a leader from the religious and political New York City Jewish Community.  He has moon lighted as an actor and met four US Presidents before they were in office. In his early years he worked for Jackie Onassis, in addition to meeting a lengthy list of US political notables and celebrities. The other is an Evangelical Christian author, eschatologist who mingles with and has interviewed leading globalist politicians in the European Union. She possesses an acumen of EU policy and a keen knowledge of decisions being made in Brussels. Moreover, her related predictions have happened and continue to unfold. When you add his wit, her humor, their unparalleled insights into world affairs, and their taking talk politics to the edge you get the Twist. Welcome to the Don Pravda and Erika Grey Show.

There is little doubt that this world’s priorities are a bit twisted. There is however, one curveball you can count on when you want to present your congregation with insightful Evangelical and Jewish commentary on world political events: the Don Pravda and Erika Grey podcast Twist.

Erika, an Evangelical Christian who is an acclaimed international journalist and geopolitical analyst, has teamed up with Don, an influential Jewish leader and U.S. political insider, to provide honest commentary on unfolding items in the news.

Whether you are looking for a fresh perspective on the crisis in Ukraine or wondering how the EU just stepped up as a world power, Erika and Don bring unparalleled depth and breadth to an analysis that is uniquely aligned with both Evangelical Christian and Jewish thought.