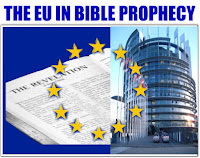 Second to Israel becoming a nation in 1948, the formation of the EU is the second greatest event to occur in the unfolding of Bible Prophecy. At the time of Israel’s rebirth as a nation, only 3 years later the European Union formed.  Initially named the European Coal and Steel Community, evolved into the European Communities in 1957 at the Treaty of Rome.

Before the final signing of the treaty in 1957. Paul -Henri Spaak while gazing over the Forum Romanum in Rome  Spaak said “I think that we have re-established the Roman Empire without a single shot being fired.”

Renamed the European Union at the Treaty of Maastricht in 1999, the ECSC and the European Communities marked the beginnings of the final world empire: the revived Roman Empire.

This term is not found in Bible Prophecy or given in any prophecy in the Bible but is based on the description of the final world empire given by Daniel the prophet. The revived Roman Empire, depicted as the Beast of Revelation, in its future state will launch the Antichrist. The Antichrist will sign a peace treaty guaranteeing the nation’s peace and this event begins the Tribulation period.

The Antichrist Will Rise from the European Union

It should be noted that  the Antichrist enters the revived Roman Empire and raises it to its pinnacle of power. This occurs during the Tribulation. It states in Bible Prophecy, in the book of Daniel that after the league made with him he works deceitfully.  (Daniel 11:23) This indicates that those who put him in power do not know his real intentions or that he is working to his own aim.

Evidence the EU is the Final World Empire: The Revived Roman Empire

Below you will find links to my article or video 40 Reasons Why the EU is the Revived Roman Empire. In addition a copy of my free book that you can read article by article.  Its title is

The Empire: Bible Prophecy and the EU -Free Edition

can be found in the links below.

You can purchase the book’s equal version named, The Seat of The Antichrist: Bible Prophecy and The European Union

The Empire: EU and Bible Prophecy-INT

The Empire: As was time of Noah and Lot-1

The Empire: The Antichrist-2

The Empire: Cornerstone for Uniting the World-4

The Empire: Building an Empire-5

The Empire: Seat of Antichrist- 6

The Empire: Ten Kings-3 Plucked up by roots- 7

The Empire:Mark of the Beast-8

The Empire: United States in Prophecy- 9

The Seat of the Antichrist

You can also read or listen to this interview where I discuss the EU as the Final World Power.

EU Information and Details and How they Pertain to Bible Prophecy

If you do not have time to read the above book but would like shorter articles giving you information on the EU and how it pertains to Bible Prophecy see the articles below.

History of the European Union and EU news.

An EU Directory For EU News and Prophecy Buffs

For short primers on the EU’s history or how the EU functions see the following articles.

The Whore of Babylon rides the Beast of Revelation. The images and symbols are everywhere throughout the EU, from Europa-the woman riding the Beast to the EU Parliament building based on the tower of Babel. Catholic thought lent to the EU’s formation. Leading Catholics served their faith in the formation of the EU.  Even the treaty’s principle of subsidiarity was taken from Catholisism.

One world government is a major catchphrase in Evangelical Bible Prophecy circles. Many prophecy watchers believe  conspiracy theories and their tales of individuals conspiring for world government. These groups often site US globalists.  All the while missing the very sophisticated and well meaning group within the European Union that the following articles provide more details.

Bible Prophecy Fulfilled- The EU Path to One World Government

The EU and One World Government

The Coming One World Government

Bible Prophecy News-Who’s Who in the European Movement

The Empire: Cornerstone for Uniting the World-4

Former EU Commission president Manuel Barroso who when asked by a reporter about the structure of the EU answered that the EU was an empire, a non imperial empire. The prophet Daniel exactly predicted the revived Roman empire, the final world empire.

The EU: The Building of Its Empire

The New Order: The Age of Empire: The New World Order is History

The EU and Bible Prophecy

The EU-Misunderstood by the Media

One of the reasons there exists misinformation in Evangelical circles regarding the European Union is because it exists in the Media.  The EU is largely misunderstood. The headline grabbers that garnered page hits were those that stated that the EU was going to fall apart. Every crisis the EU hit, the media reported that the EU would not exist for much longer.   In the next articles I highlight some of the media errors of the functioning of the European Union.

Why US Citizens Better Pay Attention to the EU

These series of articles provide commentary on various news events that lend to the rise of the EU into the prophetic forcasts. The following articles as as running EU news in the areas that relate to end time Bible Prophecy.

This page is part of a series of pages of Main Bible Prophecy Topics. Other subjects fall under these topics. For example under the Beast of Revelation falls World Government. On the Tribulation page you will find the Peace Treaty, which begins the Tribulation.   The Abomination of Desolation begins the Great Tribulation.  It falls under that category.  This is set up so that you can easily navigate the key topics of end time Bible Prophecy.

Euro-Eurozone
An empire’s currency is a key part of their economic strength and power.  Within a couple of year’s of the euro’s launch in the year 2000, the euro ranked as the world’s second reserve currency.   These articles begin at the time frame of the EU’s financial crisis and are added to.
EU ARMY

An EU army is a key aspect of the final world empire because this army will lay siege to Jerusalem. In addition it will conquer many nations during the Tribulation.  This army will also meet the other armies of the world at the battle of Armageddon.  The EU army has evolved significantly since the EU’s financial crisis. The army is emerging literally overnight.   Below you will find my articles and videos related to these developments.

The Ten King prediction shows a view to the EU’s (Revived Roman Empire) institutional structure during the Tribulation.  For several decades EU politicians have proposed going forward with an inner core of members. The following articles highlight the developments in this area.

BREXIT – 3 Horns Plucked up by the roots

Expersts predicted that BREXIT would cause the EU to dismantle. On the contrary, the EU became stronger after the BREXIT vote. Even more so than BREXIT moving the EU forward, it might be the fulfillment of Daniel 7. Read the following articles to learn the details.

More than any other US President, Donald Trump’s politics rocked European Union integration. Especially the EU’s formation of its army. For this reason, this site gives Donald Trump  precidence on this EU and Bible Prophecy page.

Articles Aligning with Bible Prophecy, meaning that by speculation we know that these areas will lead it to its final state, which is described in prophecy in the Bible.

For more of my articles see my blog on Euractive, dealing with an interview with US economist James Rickards on the euro and the dollar and also featuring a series of interview’s with the EU’s chief architect Andrew Duff on EU federalism and on the next treaty revision and the EU’s move forward.

I have written  articles on the European Union for secular publications. I wrote for Yahoo as a contributor and the articles reprinted on my blog are from their site. I have labeled the articles that were in Yahoo News.

In addition I have a blog on blogactiv eu, It is a division of Euractiv which is the leading online media for EU affairs. Blogactiv is devoted to EU opinion and policy debates, those articles are included as well. You will also find here my Eye on the EU Youtube Channel, which reports from a pro-EU secular viewpoint.
While I try to remain neutral I lean pro-EU in my writings and pro-EU federalism.  I am in support of the evolution of the European Union into a United States of Europe because this direction fulfills Bible Prophecy. I am for all of the pieces of Bible Prophecy falling in place.

The EU in Bible Prophecy

EU News Eye on the EU

This page is part of a series of pages of Main Bible Prophecy Topics.

Other subjects fall under these topics. For example under the Beast of Revelation falls World Government. On the Tribulation page you will find the Peace Treaty, which begins the Tribulation.   The Abomination of Desolation begins the Great Tribulation.  It falls under that category.  This is set up so that you can easily navigate the key topics of end time Bible Prophecy.

Signs of the End Times

The Beast of Revelation: The Final World Empire

The Mark of the Beast

Book of Revelation: Judgements and Plagues

For Bible Prophecy Updates and News in specific areas of the world see the pages below.

US in Bible Prophecy