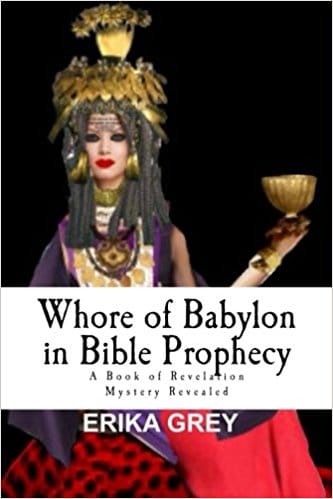 In the following articles you will find the answers to the question of who is the Whore of Babylon and will discover details never before revealed. You can either read through the articles listed  or purchase the book these articles derive from.  If you would prefer the free version, keep reading and click the links that follow the introduction.

Whore of Babylon in Bible Prophecy: A Book of Revelation Mystery Revealed

The Whore of Babylon and her judgement are described in Revelation 17 and 18.  It is a major prediction in Bible Prophecy. The passage has been exposited by theologians, teachers and all who write on end time Bible Prophecy.

I too have written on these passages.

In March of 2017, the door opened  for me to visit Rome and the Vatican.   I was able to  attend the 60th Anniversary of the Treaty of Rome, which established the European Union, which was  a major  European Union  event   along with “the March for Europe” where citizens came from around the EU to march for the EU’s move forward.   I toured Rome and visited the Vatican and Vatican Museums.
The verses of Revelation 17 and 18 came to life as never before after seeing Rome for myself. After leaving Rome I embarked on extensive research and study of the city and its history.  The finished product is this book, which reveals insights into the Whore of Babylon along with her identity and details you will not find anywhere else.
If Rome showed me anything it is the fulfillment of the prophetic Word to the letter.  The Word of God never ceases to amaze me in its accuracy and dimension.  It truly is a living Word.

We are living in a unique time in history where as never before so much knowledge is at our fingertips and can be attained with the click of a mouse. Research that would take years now only takes months and days.  With the proliferation of knowledge also comes the ability to understand the missed details in Bible Prophecy and get their full meaning as never before. So it is with understanding the full meaning of the Whore of Babylon who is wickedness   in the eyes of God and the judgment that will come upon her.


This is an excerpt from the free online version of my book Whore of Babylon in Bible Prophecy: A Book of Revelation Mystery Revealed
To Continue Reading see the articles below:
Whore of Babylon in Bible Prophecy: A Book of Revelation Mystery Revealed
Would you like to understand the Whore of Babylon prophecy described in Revelation 17 and 18? Why does the Whore Wear Purple and Red, and ride a Red Beast and why is her name branded on her forehead?
The Whore of Babylon in Bible Prophecy: A book of Revelation Mystery Revealed examines this passage while revealing new details of “Mystery Babylon” along with compelling evidence of the Whore of Babylon’s identity along with her role in the Revived Roman Empire and her coming judgment.
The book uncovers:
Hidden details of Babylon’s origin
How the little horn points to the Harlot and the revived Roman Empire.  The names of blasphemy on the seven heads and their correlation to the woman riding the 7 to 8 headed Beast.
You will also learn historical and often missed details of the Queen of Heaven, the Vatican, and the tie to the mysterious Zechariah 5 prediction and how the ten king prophecy showcases modern politics. Disclosed is overwhelming proof the city of seven hills is Rome and many other details missed by other Bible expositors.
Scholar, Analyst, Bible Prophecy Expert, Journalist and Commentator; Erika Grey once again delivers a fact filled, information rich expose.
The above book is also for free here and you can read it chapter by chapter on my website, just follow the links.   Some of the titles have been slightly from the book but the material is the same.