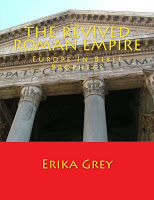 Daniel and John, in the Revelation, disclose the area and identity of the final world power. Nebuchadnezzar’s dream image details the four world empires that ruled the Middle East region throughout history (Daniel 7 and 8).

Of all of the beastly visions, the fourth beast disturbs Daniel the most, and he inquires of an angel who stood by the vision, and the angel identifies the four beasts as four kingdoms that will rule on the earth. Daniel specifically asks about the fourth beast. The straightforward animal nature of the first three beasts symbolizes the notion that these kingdoms possess an earthy element, but the horrifying and dreadful appearance of the fourth-its iron legs and teeth, its bronze nails, and its many heads and horns-makes it appear demonic, as if it emerged from the pits of hell. The iron on the image represents modern weapons of steel. To Daniel, it appeared as a creature out of a dark fantasy, for it was unlike anything he had ever seen.
The contrast of this beast to the others is further seen in Nebuchadnezzar’s dream image (Daniel 2: 31-41), which symbolizes the four kingdoms and relates their strength to metals. The golden head of the image is Babylon. Its silver arms and chest are the Medes and Persians. Its bronze thighs represent the Greek empire, and its legs and feet are of iron, but the toes have clay mingled in with the iron. According to Scripture, the fourth beast is made of iron because iron “breaks in pieces and shatters all things.” While gold, silver and bronze each possess some esthetic value and pliability, iron’s sole value is its strength. This entity does not merely rule and have dominion; it crushes and breaks in pieces all of the other kingdoms, and its purpose is that of a destroyer and crusher rather than a conqueror which is possible using modern weaponry.

The fourth beast encompasses the same area as the ancient Roman Empire. It rises from the midst of the seas, specifically the Mediterranean (Rev. 13:1). When Daniel foretold Jerusalem’s destruction in A.D. 70, he simultaneously prophesied that the coming prince would come from the area of the Roman Empire. Daniel 9:26 states: “The people of the prince that shall come, shall destroy the city and the sanctuary.” The Romans under Titus in A.D. 70 destroyed Jerusalem.

The Antichrist holds his political position in re-empowered Europe.

The final world empire represents a second phase in the Old Roman Empire’s history. According to Daniel 7:24, the fourth kingdom never passes out of existence, but rather continues in some form until its final condition emerges. The Scriptures view the Roman Empire as continually developing until the second coming of Christ. The final world power will possess similarities to the Old Roman Empire. Dwight Pentecost summarizes the purpose of its revival by concluding: “As the Roman Empire had been the agency through which Satan attacked Christ at His first advent, that empire in its final form will be the agency through which Satan works against the Messiah at His second advent.”