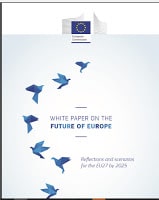 I keep writing about and talking about the European Union as the final world empire that is spoken of and forecast by Daniel the prophet and John in the book of Revelation And I have written about the 60th anniversary of the Treaty of Rome. This is where EU officials are going to be meeting … Read more

FORGING A CATHOLIC EUROPE The Bible in the book of Revelation depicts the Whore of Babylon sitting on the Beast, signifying that she plays a principal role. Religion does play a part in European politics. Its precepts provided the ideology that prompted the European Union’s formation. Religion has a voice in European politics through the … Read more

THE SEAT OF THE ANTICHRIST t want another committee. We have too many already. What we want is a man of sufficient stature to head the allegiance of all people and to lift us out of the economic morass in which we are sinking. Send us such a man and be he god or the … Read more

THE BUILDING OF AN EMPIRE Former Harvard Professor Samuel Huntington speculated in the 1990’s that “the EC if it were to become politically cohesive, would have the population, resources, economic wealth, technology and actual potential military strength to be the preeminent power of the 21st century.” Cornelius van der Klugt, while he chaired Philips, affirmed: “If … Read more

At the European Union Summit on September 16, 2010, where EU leaders gathered to discuss their helping the EU build a more common foreign policy, Council President HermanVan Rumpuy stated that the 27 nation bloc which accounts for 22 percent of the world economy “is punching below its weight.” He prompted leaders to discuss their … Read more